UCM students, Aaron (BSC Hons Finance and Accounting) and Sophie (BS Hons Event Management and Marketing) are currently on an unforgettable internship at Pine Lake Marina, situated in the heart of the Garden Route National Reserve, one of South Africa’s glittering gems. This is their blog.

Our journey to South Africa was very eventful from the get-go. We started so well by getting to the airport on time, only to find that our flight was delayed – not just once, but three times! After a few stress-busting caffeine hits at the airport departure hall and what felt like an eternity, we finally got on our plane.

Due to the delay, the internal flight from Johannesburg to George that we were meant to be on, had taken off before we’d even landed… clearly not an ideal situation.

This puts us in a huge panic mode, causing us to run from terminal to terminal, asking every single airline if they had a flight leaving for George that day. It was only after we searched the entire airport, did we find an airline that was headed that way… and they were already boarding.

It would seem that at that point our luck had miraculously changed, as we managed to check our bags onto the plane and went through airport security, in less than five minutes! Phew… thank goodness!

The first day at Pine Lake Marina was pretty chilled, allowing the both of us to recover from the long journey.

The Duty Manager of Pine Lake Marina, Franco, kindly showed us to our chalet, where we were greeted by big welcome baskets of South African food and drinks. The room with the double bed was battled over with a game of rock paper scissors, which Sophie came out victorious winning 2-1.

We slept well that night, after a long day of travel and our bellies full of biltong – a South African delicacy in a form of dried and cured meat – delicious! 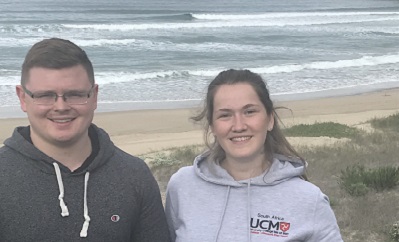