Now in their tenth year, the two competitions were established in 2008 along with the Isle of Man Food & Drink Festival as part of DEFA’s work to grow the contribution of food and drink to the Isle of Man’s economy.

Sponsored by Robinson’s, the two coveted titles have been hotly contented every year since.

With the competition reaching its 10 year milestone, only previous winners were invited to compete in the Chef of the Year category 2018.

Minister for Environment, Food and Agriculture, Geoffrey Boot MHK, said, “The competition continues to raise the profile of the skill and talent of the Island’s chefs as well as the quality and variety of Isle of Man produce."

“The 2018 Chef of the Year will have the remarkable opportunity of placements in a number of top London restaurants, kindly organised by award winning and internationally renowned Manx-born chef Colin Clague, who will be on the judging panel for the finals.”

Four chefs and five student chefs competed for a place in the finals.

Darren Woods from 14North and Zaneta Krol from Howarths were selected by the judges to compete for the Chef of the Year title.

Both students are studying at University College Isle of Man (UCM) which offers qualifications in hospitality and catering.

Chris Franklin, Head Training Chef at UCM, said, “The competition gives students the opportunity to create their own dishes and recipes using Manx ingedients and cook them in front of an audience and against the clock. It’s great experience for them as they embark on their careers.”

Well-known local chef Tony Quirk said he and his fellow judges – Janna Horsthuis and Paul Caisley from Robinson’s, and Audrey Fowler, Marketing Officer at DEFA, found it extremely difficult to select finalists, due to the high quality of entries.

“All the dishes were exceptional,” Tony said. “The content and presentation were top class and, in terms of taste, the dishes were to a really high standard. All the chefs should be proud of themselves.”

The finals will take place at the Isle of Man Food & Drink Festival in the Villa Marina gardens on Saturday 15 and Sunday 16 September 2018.

Finalists will have their dishes judged by Minister Geoffrey Boot MHK, Paul Caisley from Robinson’s, and Chef Colin Clague.

Janna, from Robinson’s, said, “We supply high-quality Manx produce to eating establishments and enjoy encouraging chefs to come up with ever more inventive recipes to tantalise the taste buds.” 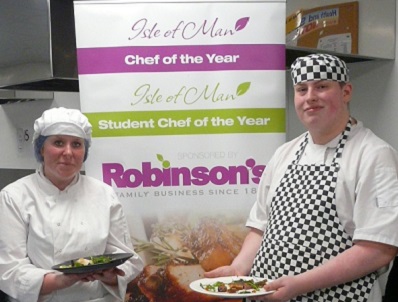