The Higher Education Awards Ceremony, one of the University College Isle of Man’s (UCM) key annual events, took place at the Villa Marina where 100 students received their awards.

The awards ceremony marked another incredible year for UCM higher education students, 86% of whom achieved a top grade (first or upper second class), which is 10% over the UK standard*.

In his opening speech, the Chief Minister, Howard Quayle MHK, congratulated the graduates, and gave recognition to their hard work and the sacrifices they would have made to achieve success.

He identified graduates as the future of the Island and acknowledged the skills and expertise that they offer, “Many of you will have already started contributing to our growing economy; I applaud all that you have done and look forward to your future contributions and successes.”

Receiving the awards at the ceremony were students who completed their degree courses at UCM, in conjunction with the University of Chester and the Manchester Metropolitan University, as well as those who have completed higher level apprenticeships and professional certification.

This year’s Student of the Year award was presented to Alex Bowker, a BSc (Hons) Computer Science graduate who has shown great passion and dedication to achieve academic success, despite the challenges he faced throughout his learning journey.

Dr. Rachel Glover, a prominent Manx scientist, was announced as this year’s Honorary Fellow for UCM. This award recognises the significant contributions made by individuals whose professional and/or personal achievements truly reflect UCM’s mission and vision.

Dr. Glover whose expertise is in molecular ecology, biosurveillance, bioinformatics and genomics, is also the co-founder of Taxa Genomics, a Manx company that provides DNA testing services to the environmental and veterinary industry. Her recent work includes designing a genetic health screen that can identify inherited diseases in dogs.

Jo Pretty, UCM Principal closed the awards ceremony by sharing with attendees of how valuable young people and adults are to the Isle of Man. She said, “We invest in them by providing the very best education, facilities and experiences for them; and like our successful graduates here this evening, in turn they will support our economy and our community.”

To find out more about its degree and postgraduate courses, members of the public are invited to attend UCM Higher Education Open Day at its Nunnery campus on Wednesday 16th October 2019, from 4-7pm. There will be a separate timeslot for school (Year 12) pupils earlier that day, between 10.30-2.30pm. 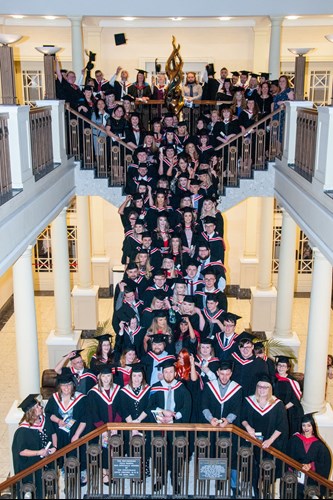